Archive for the ‘Press’ category 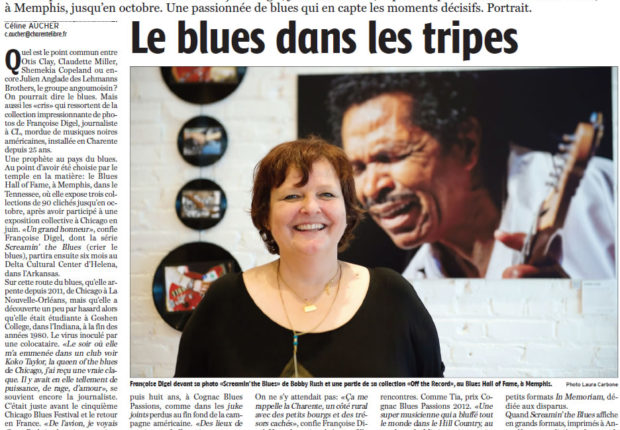 AUG 20 – 2016 « The blues is grabbing her by the guts. » In a developed story, Céline Aucher, writer for Charente Libre in Angoulême, France, describes the creative process that brought her colleague Francoise Digel to her current exhibit at the Blues Hall of Fame in Memphis. That must be the blues. A mix of joy, […] 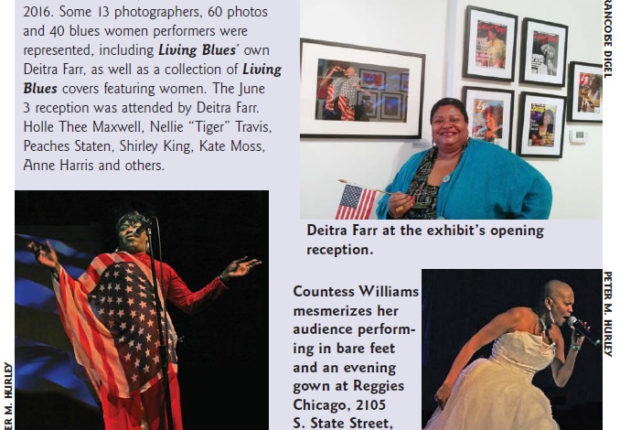 AUG 4 – 2016 Living Blues #244 includes a story about Lynn Orman Weiss’ Women of the Blues exhibit, which was up in Chicago in May and June 2016. Francoise Digel presented several pictures of Chicago blues women at that exhibit, some of which are also part of the Screamin’ the Blues exhibit (Holle Thee Maxwell, […] 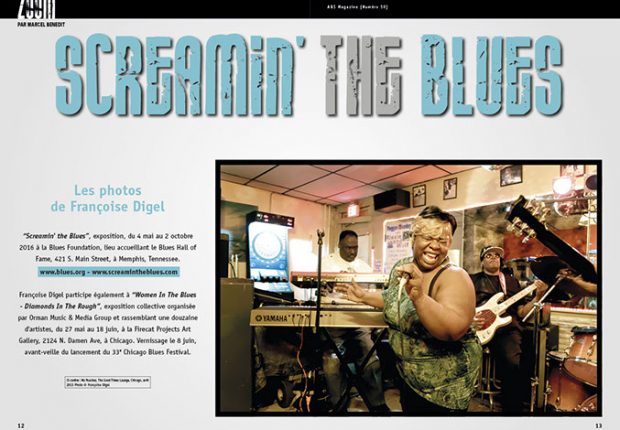 JUN 20 – 2016     French ABS Magazine, specialized in African American musics, chose ‘Screamin’ the Blues’ for its Focus in the magazine’s 50th issue, published in May, 2016. In a four-page spread, writer Marcel Bénédit presents the exhibit and finds out where love for the blues originated for Françoise Digel. (in French) 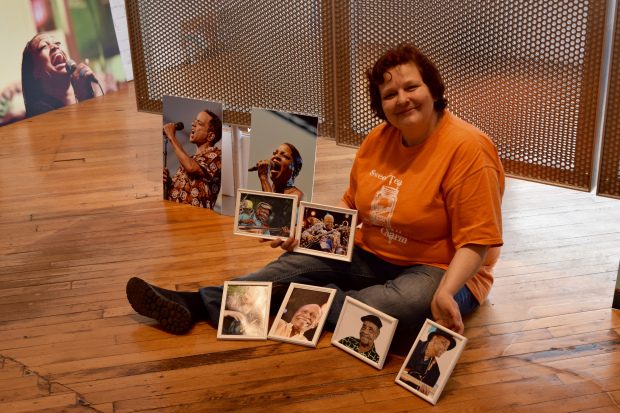 JUN 8 – 2016     When an authentic musician performs onstage, you may get the chance to watch them become completely immersed in the music, giving into the music’s frenzy and feeling. French photographer, journalist and blues lover Françoise Digel captures moments like these in her exhibit Screamin’ the Blues. On display at The […]

JUN 2 – 2016 While Screamin’ the Blues is being shown at the Blues Foundation in Memphis, Françoise Digel’s work is featured in another exhibit, ‘Women of the Blues: A Coast-to-Coast Collection’. This collective exhibit, which runs from May 27th to June 12th at the Firecat Projects gallery, at 2124 N. Damen in Chicago, features over 60 […] 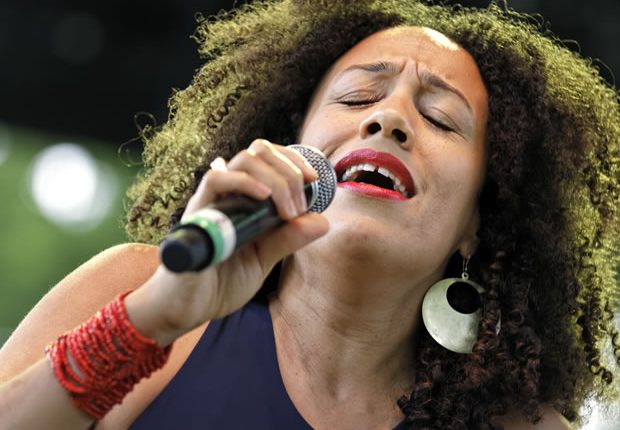 MAY 28 – 2016 I was recently featured at the Blues Hall of Fame in an exhibition called “Screamin’ the Blues” by Francoise Digel. The collection highlights how artists emote and embody music they are performing. When I look at the images it reminds of a little nugget of advice I heard Aretha Franklin say […]

May 17 – 2016 Francoise Digel was interviewed by Khaki Walton for her « Checking on the Arts » show broadcasted on WKNO, a public radio station reaching more than 1.2 million people in the Mid-South. The interview, about the ‘Screamin’ the Blues’ exhibit presented from May 4 to October 2 at the Blues Foundation in Memphis, aired on May 16. […]

Interviewed on Blues on the Couch 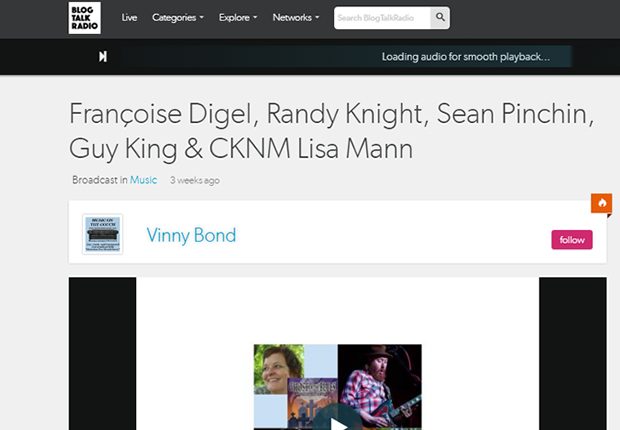 Monday, May 2, 2016 We begin the show speaking with Françoise Digel, whose exhibit Screaming The Blues debuts at the Blues Hall Of Fame on Friday.  Ms. Digel will chat for a few about the exhibit and how she came upon the subject. Vinny Bond Marini interviewed Françoise Digel on Monday, May 2, during the […] 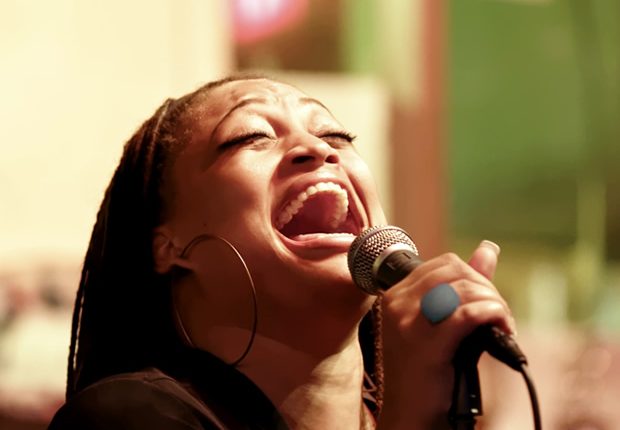 MAY 2 – 2016 Blues singers and musicians expressing their passion are the subjects of the photography exhibit, Screamin’ the Blues. French photographer and blues music lover, Françoise Digel, has captured her subjects fully possessed by the blues. The show of forty prints opens on May 4, 2016 in the Legendary Rhythm and Blues Cruise Gallery located in […]

In Time Out Memphis 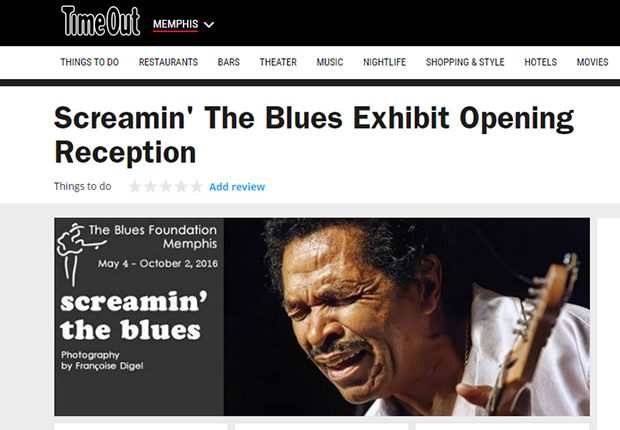 APR 30 – 2016     Blues singers and musicians expressing their passion are the subjects of the photography exhibit, Screamin’ the Blues. French photographer and blues music lover, Françoise Digel, has captured her subjects fully possessed by the blues. Time Out Memphis presents the exhibit.