The Lehmanns Brothers have the ardor of their youth. With their compositions, they wake up the soul and brass-tinted funk from the seventies, twist them into a modern groove. Their scream? “It is when music is bubbling up inside me, when this inner steam lingers too long and has to burst out,” explains Julien Anglade, surrounded by his “brothers” Noe Hourant and Alvin Amaizo on guitar, Pierre Sanges on bass, Lucien Guyon on trumpet, Pierre-Antoine Sylvestre on trombone, and Dorris Biayenda on drums. 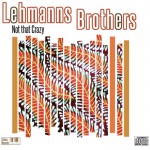